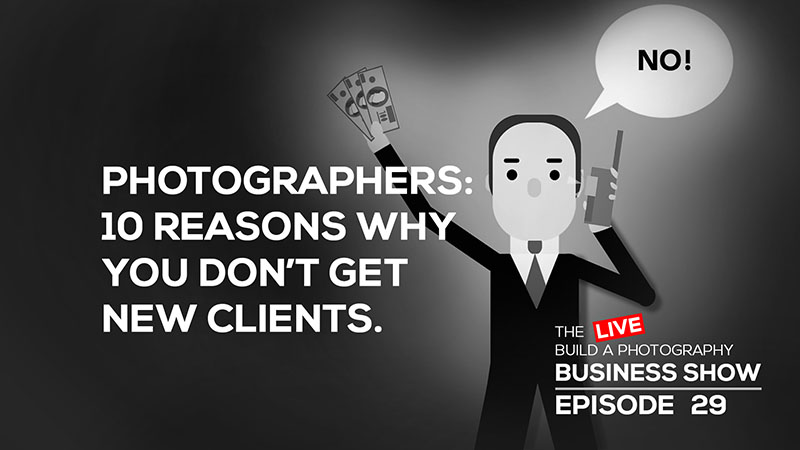 In this live event we looked at some of the reasons why real estate photographers aren't getting new clients, or why you're not getting as many as you'd like. Now obviously we talked about pricing and differentiation because they're the big ones, but we also looked at a few less obvious reasons that might spark a new idea for you.

So if you're a real estate photographer or an architectural or commercial photographer, and you're looking for some practical suggestions for what you can change in order to build your business, then I hope you enjoy this show.

Photographers: 10 reasons why you don't get new clients

Why don’t you get new clients? Now maybe you’re getting some new clients, but I know a lot of photographers are trying to figure out why so many great prospects say ‘no’?

There are a lot of reasons why that can happen, but today I want to highlight ten big ones, and number 1 is the obvious one – clients aren’t willing to pay your prices.

Now why is that?

Now there are a number of things you can do to get around that, but one thing you can do is you can work on your brand so that you look like you’re an expensive photographer rather than a cheap photographer. Where you get problems is if there’s an inconsistency between your brand and your prices, so maybe they’ve looked at your website but your website makes you look like a cheap photographer, then they’re not going to be willing to spend those higher rates because basically they feel like they’re getting a bad deal.

It’s like, your website seems to suggest you’re a $99 photographer, so when you tell them that your photos start at $300 then they don’t feel good about that. Or maybe you’re giving off amateur vibes with your booking process, or maybe you’re disorganised and you give the impression that you don’t know what you’re doing, but whatever it is, you need to figure out how your online content and your communication aligns with your photography rates.

Now here’s another reason, and this gets to the idea that it might be them, not you – it could be a cashflow issue for that client. So they might love what you do, but they just don't have the money to pay for you right now, and maybe that’s why they either take the photos themselves or they hire a cheaper photographer, even though they’d like to hire you if they could afford you.

Now to get around this some real estate photographers offer an option where the client can pay for the photos after the home sells. If you want to do that, maybe you would need to increase your rate to cover the risk for you, so maybe you’d offer that client two options: they can pay, say, $150 now or they can pay $450 when the property sells, but maybe they pay nothing if it never sells. Now I’ve got some real concerns about that approach, and if you want to do it then I think you’d want to be very careful about it, but it is something some photographers are doing.

Whether you’re up against that, or whether you’re just up against other small business, you’re going to do better when you have a business coach or someone to guide you and help you with all that we’re talking about today.

Quick example, I’ve been helping one of my coaching clients so they can take a one year sabbatical away from their business, and I helped them introduce some big changes so that things will continue to run without them.

Anyway, I got an email from that photographer this week where they said that they would have been struggling to make it all happen without me guiding them, and they were so appreciative of the help I gave them. If they were on their own then they wouldn’t be doing what they’re doing, and that’s the kind of thing a coach can do for you. And look, if you think I can help you then get in touch and we’ll have a chat.

3. You seem to be no different to other photographers in your area.

Alright, number 3 on my list of why you’re not getting new clients is that you seem to be no different to other photographers in your area. So what I mean there is that if you have nothing unique to offer then they won't hire you because they figure they can get the exact same thing from a cheaper photographer.

Or alternatively, maybe you do have something unique, and maybe it's a service offering or maybe it's who you are, but maybe you aren't communicating that difference in a visible or effective way.

So the obvious way to get around that is to, first of all, get clear on what makes you different. So if I was to ask you, why should I hire you instead of another photographer in your town, you need to be able to give a real clear answer.

And by the way, saying that your photos are better probably doesn’t cut it, because typically most clients can’t see the difference. So your point of difference needs to be something that your clients understand and something they see value in.

4. Your photo packages are too confusing, or not what your customers need.

If that’s a problem for you, then you might need to simplify your packages, and remember, you can always invite your customers to request a custom quote for something special, and maybe it’s better to do that than to write down every possible combination.

The other problem could be that you aren’t giving your customers what they want. For example, you might be offering Matterport plus photos as your only option, but maybe some clients don’t want Matterport tours, or maybe there’s something else you’re doing that clients don’t like. What you need to do here is find out what your clients want, and present those options in a simple way that makes it easy for them to understand.

Moving on, and number 5 on our list of why you’re not getting new clients is because you're invisible. I don’t mean like, Harry Potter Cloak of Invisibility invisible, I mean that you're sitting around waiting for clients instead of actively marketing your business, but they’re not calling you because they don’t even know you exist.

But whatever you choose to do, make sure you’re visible and start engaging with those prospects, because they won't hire you if they don't know you exist.

6. You're presenting services, not solutions.

Number 6 on our list of why you’re not getting new clients is that you're making the mistake of presenting services, not solutions. Your real estate clients could not care less about your photo packages and your virtual tours and all that – they just want to sell homes and get that commission.

I mean, whether you’re working with real estate agents or builders or restaurants, they all want something that you can definitely help them with, and that’s sales. Show them how you help them sell stuff, join those dots together and show them how your solution is better, and you’ll have them queuing at your door.

7. They forgot about you.

Now if you want to avoid that, try being more active when it comes to staying in touch with your prospects. I mean, if you’re counting on them hiring you as soon as they hear from you, then you’re going to miss out on a lot of clients because most won’t hire you immediately, either because they don’t yet really know who you are, or just because they aren’t yet ready to hire right now.

So it’s absolutely imperative that you have a way of staying top of mind with those prospects so that when they are ready to book you, whether it’s two weeks from now or if it’s next year or beyond, you want to make sure that they don’t forget about you, and that’s your responsibility, not theirs.

Now for number 8 and this is a tough one – they aren’t hiring you because don't like you. I’m hoping that this isn’t the case for you, but I had to include it in this list because I know it happens – if you come across as a jerk, if you’re arrogant or difficult or rude, then they won’t want to work with you, no matter how awesome your photos are.

To give an example of how big an issue this is, I saw a survey that said that more than 40% of customers switch companies because they were put off by a rude or unhelpful employee.

So what can you do? Well, for starters, don’t be a jerk. Hopefully you know what that means, and if you do, then you’re probably not a jerk, and if you don’t know what I mean by that, then it might be that you are a jerk, and this point is being missed on you anyway. But for those of you who are ordinarily great people, I get it that sometimes you can accidentally be a bit of an idiot when you’re engaging with a difficult customer or prospect and maybe you say something you regret – I understand that it’s hard sometimes.

But if 99.9% of the time you’re working hard to show generosity and respect and to be a good, helpful member of your community, then you’re going to be okay.

Alright, we’re up to number 9, so the second last one on our last – maybe you’re not getting new clients because they don't trust you. What I mean by that is that clients won’t hire you as their photographer if they aren't confident that you can deliver what they need.

Think about it - there's a lot of money on the line for your clients when it comes to the sale of a home, and maybe they aren't sure that their clients - the homeowners - will like what you do. If they feel like hiring you is a risk then they’ll find a less risky option. You want them to feel absolutely safe working with you, and this is where testimonials and reviews are so helpful.

You see, when you have other people talking about their awesome experience with you, that’s going to make your prospects feel a lot safer working with you, so use those to minimize the perceived risk, and you’ll get more prospects saying ‘yes’.

10. You don't have enough knowledge about the industries you work in.

Now, the last one on our list of reasons why new clients aren’t hiring you, and maybe it’s because you don't have enough knowledge about the industries you work in, or about the people who work in those industries.

So you want to get your language right, show them that you know what they’re going through and the role you can play in helping them get some wins on the board, and you’ll have more prospects saying ‘yes’. 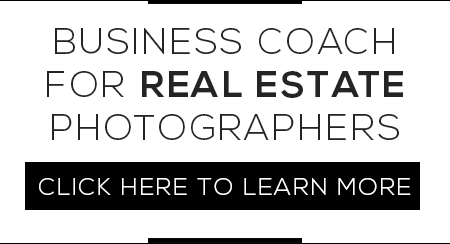 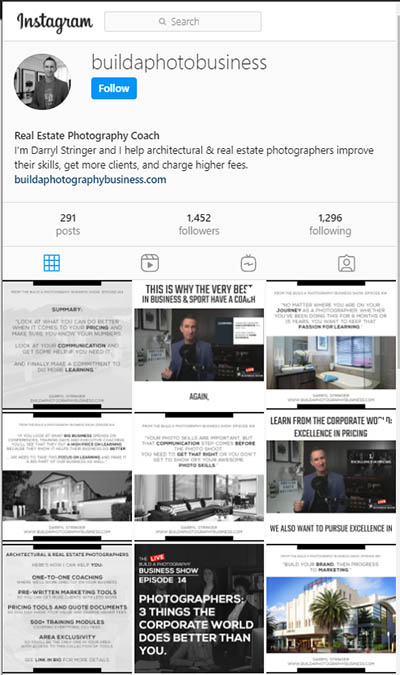